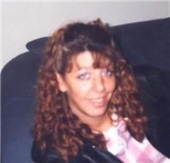 Meriden - Janet (Johnson) Mickens, 41 died unexpectedly on Friday January 3, 2014. She was born March 6, 1972 in Meriden a daughter of Harold A. Johnson and his wife Linda of Florida and the late Arla C. Brandl. She was a lifelong resident of Meriden and had previously worked at Citizen's Bank. Although she had a hard time dealing with her mom's passing, she had a good heart and will be truely missed by those in her family that really loved her. In addition to her father she is survived by three children P.J. and Kala Mickens and Jazmin McFarlane, three sisters; Laura Longley, Joyce LaRouche and Anne Andrews, a brother; Harold Johnson Jr., her former husband, Patrick Mickens, many aunts, uncles, nieces, nephews and counsins. Her grandfather, F. Luis Chase passed away the day after her. A private memorial service will be held at a later date. The Beecher & Bennett-Flatow Funeral Home, 48 Cook Ave., Meriden is in charge of the arrangements. In lieu of flowers donations may be made to the funeral home to help with the funeral expences.