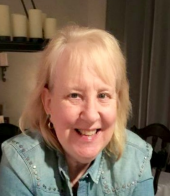 Janet M. (Paier) Kaminskas, age 59, passed away peacefully on October 28, 2015 at Smilow - Yale New Haven Hospital. She was born September 22, 1956 in New Haven the daughter of the late Sidney and Vivian (Govang) Paier. Janet is survived by her husband, Bernard, her two daughters Kellie (John) Stein III of Derby and Kristen (Dimitrie) Bogiatzopoulos of Hamden and her brother Richard (Amy) Paier of Orange. She also had many nieces and nephews whom she adored. Janet was predeceased by her twin daughters, Heidi & Susan. Janet was well known for her sense of humor and unwavering strength. Her daughters were her life, along with her cherished dogs, and her many friends. Relatives and friends are invited to visit with her family on Tuesday, November 3, 2015 from 9:00 am - 12 noon at BEECHER & BENNETT FUNERAL HOME, 2300 Whitney Ave, Hamden and may attend her funeral service which will begin at 12 noon. Burial will follow in All Saints Cemetery, North Haven. Contributions in Janet's memory may be made to Smilow Cancer Hospital at Yale New Haven, 20 York St, New Haven, CT 06511-3202.