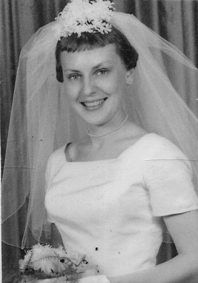 Janet Peregrin Flynn, 86, flew to heaven on January 4, 2022 to join her son Seth and other loving family members. Janet will be lovingly remembered by her husband and best friend of 70 years, Edgar A. Flynn of Meriden; her daughter and son-in-law, Nora and Mark Roderick of Meriden; daughter-in-law, Marianne Buck Flynn of Higganum; and grandchildren, Emma and Jillian Roderick and Evan Flynn.
Born in Meriden on November 21, 1935 to the late William and Augusta Beal Peregrin, Janet was a graduate of Meriden High School Class of ’53, and went on to earn her Associates Degree from Teacher’s College in New Britain. She taught Sunday School during these years at St. John Lutheran Church. After working at local banks, Janet co-founded the St. John Preschool where she was also lead teacher for nine years. A beautiful woman inside and out, Janet was a candidate for the title of queen for Meriden’s 150th Anniversary Celebration. When not spending time with her family, Janet’s passion was singing. She was a member of the CT Chorale, Meriden Chorus, and Wallingford Chorus. Over the years she also held leadership positions in all these groups. Janet will be remembered as a wonderful woman who was loving, kind, considerate, and forgiving.
Friends are invited to a Memorial Service celebrating Janet’s life on April 9, 2022 at 11:00 a.m. in Zion Lutheran Church, 235 Pond Hill Rd., Wallingford. Arrangements in care of BEECHER & BENNETT-FLATOW FUNERAL HOME, 48 Cook Ave., Meriden.