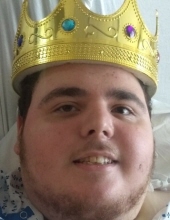 Jason Lee McGaha, 22, passed away at Yale-New Haven Hospital on August 9, 2019. Until his passing, he was the longest survivor of the genetic disorder Pyruvate Carboxylase Deficiency. Born in New Haven on August 6, 1997, he was the beloved son of Carolyn (Siegel) McGaha of Woodbridge and Roy A. McGaha of Stanhope, NJ. He is also survived by his brother Patrick McGaha, grandfather Bernard Siegel, M.D., grandmother Florence McGaha, his 'true friend' Edward Yennie, and friend and caregiver Bruce Bacon, as well as many aunts, uncles, and cousins. He was predeceased by his grandmother Barbara Siegel, and grandfather Roy L. McGaha. Jason will be especially remembered for his contagious laugh and sense of humor. He loved giving nicknames to everyone that was special to him, including his mother 'Pookie Girl Hero,' his father 'Daddi-O,' his brother 'Brother Bear' or 'Patrick Starfish,' his caregiver 'Brubida,' and his truest friend 'Eddie Spaghetti.' He also loved Disney movies and songs, often singing along so loudly that the nurses in the hospital had to close his door so he wouldn't wake the sleeping babies nearby. He knew the movies word for word and could act out the characters' lines, even with the sound off, sometimes changing the songs into silly lyrics of his own. Some of his favorite characters were Ariel and Ursula from The Little Mermaid, Anna and Elsa from Frozen, and Winnie-the-Pooh. He loved being able to go to Disney's Magic Kingdom to see all of his favorites and ride the rides over and over again. Jason had recently graduated from the ACES Whitney East School, a place he loved dearly and had plenty of fun with his teachers and peers. To honor his love of nicknames, his teacher Kathy called him 'J Bird' or 'McGoober,' and teacher Alex called him 'J Boogie Rock,' starting a fun call-and-response that Jason would answer with 'Woo woo!' He enjoyed attending many events at Marrakech, his West Haven Special Needs and play therapy groups, and town holiday celebrations. He also loved going to Speech, Occupational Therapy, and Physical Therapy, coloring, picking up yellow leaves (after his favorite color), seeing animals at the pet stores and zoos, going to pumpkin farms and apple orchards in the fall, and butterfly and fish-shaped stickers-often decorating everything in the house with them and sticking them on his nurses both at home and at the hospital. He always kept a watchful eye on his favorite Cat in the Hat, Winnie-the-Pooh, and Paw Patrol toys, putting them in a Ziploc bag under his pillow so they would be ready to go to school with him the next day. He could never resist a good meal, especially grandma's macaroni and meatballs or a slice of cheese pizza; or some Goldfish crackers, Oreos, chocolate, potato chips, or popcorn. Jason's laugh, teddy bear hugs, and childlike innocence are all part of what made him special, but what we will miss most of all is the unconditional love he shared with us. We love you Jason. A celebration of Jason's life will be held on Saturday, September 21st at 1:00 PM in Beecher & Bennett Funeral Home, Hamden. In lieu of flowers, donations in Jason's memory can be sent to Make-a-Wish of Connecticut, 126 Monroe Turnpike, Trumbull, CT 06611, Attn. Donations. Please include 'In Memory of Jason McGaha' in the memo area. Donations can also be made by contacting Cathy LaPorta at (203) 261-9044.