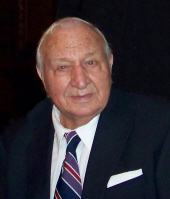 Jay Solomon King was called home to be with the Lord on April 9th, 2015. He passed away at MidState Medical Center, surrounded by his loving family. Jay, also known as 'Whitey,' was born on August 5th, 1928 in Dillsburg, PA, son of Melvin and Rosie Irene (Crooks) King. His family later moved to Hanover, PA, the place he called his 'home town.' Jay enlisted in the U.S. Army in 1948 and proudly served his country as a Sergeant, first class. He was stationed at Sugamo Prison in Japan, where convicted war criminals were incarcerated. While in Japan, he met the love of his life, Helen Brown, of Guttenberg, IA, who worked at a U.S. Army Service Club. They were married on June 30, 1951 in Tokyo, Japan. After Jay's honorable discharge from the U.S. Army, he pursued a career training American Saddlebred horses for horse show ring competitions - a career about which he was very passionate. This career took Helen and him to the states of Pennsylvania, New Jersey and Connecticut. They moved from Hartford to Meriden in 1958, where they continued to live after raising their three daughters. Jay was a loving husband, father, grandfather, uncle, and friend to many. He was a strong, kind-hearted, honest, hard-working, likeable, and generous man, who lived his life by the 'Golden Rule.' In addition to working other side jobs, he worked full-time for many years as a caster at Insilco's Meriden Rolling Mills in Meriden before retiring. Jay had the good fortune to enjoy his retirement years with Helen, spending vacations traveling in Europe, cruising in the Caribbean and Mediterranean, and traveling throughout the U.S. They also enjoyed spending their winters at their home in Lake Worth, FL. In addition to spending time with his family and traveling, Jay loved to play checkers and cards, watch professional baseball and UCONN basketball, and he took great pride in taking care of his home and yard. Jay is survived by his wife Helen, son-in-law Bruce Rudolph, daughters Karyl (Harry) Rappaport, Kimberley (Robert) Kelly, grandson Christopher Williams, sister-in-law Dorothy Small, and by several step-grandchildren, great-grandchildren, nieces and nephews. He was predeceased by his parents, sister Shirley Trone, daughter Katherine Rudolph, and sister-in-law Eleanor MacMillan. Visitation hours for family and friends will be Tuesday, April 14th from 4 - 6:00 p.m. and also on Wednesday, April 15th from 10 - 11:00 a.m. at the Beecher & Bennett - Flatow Funeral Home, 48 Cook Avenue, Meriden, CT. A memorial service will be held at 11:00 a.m. on Wednesday at the funeral home. In lieu of flowers, donations in Jay's memory may be made to the Katherine Ann King Rudolph Hereditary Cancer Genetics Program in c/o of Wendy Lux at The Hospital of Central Connecticut, Development Office, 100 Grand Street, New Britain, CT 06050.