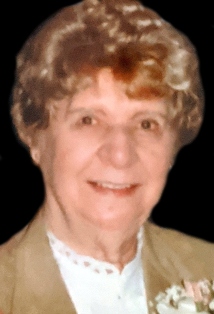 Jayne B. Sandora, age 98, of West Haven passed away peacefully on February 10, 2021. Jayne was the beloved wife of the late John A. Finger and the late Nicholas John Sandora. She was born in New Haven on March 24, 1922, a daughter of the late Ignatz and Phyllis (Pliska) Waronka. She is survived by her step-daughter Shelley Sandora of Stuart, FL; son-in-law Jay Brown of Hamden; and grandson Kyle Jones of Orange. Jayne was predeceased by her daughter Janet Lynn Brown; sisters, Helen (John) Pyrdol and Laura (Casmir) Kowalski; and her brothers, Joseph (Helen) Waronka and Stanley (Vera) Waronka. After growing up in West Haven, she lived in New Haven and Hamden, and was a resident of Woodbridge for many years. Jayne was a salesperson at Hickory Farms in Hamden, and later worked in sales at the Woodbridge Country Club Pro Shop. She enjoyed playing the piano and accordion.
Funeral services for Jayne will be private at this time; a Memorial Service will be held at a later date. Beecher & Bennett Funeral Home, 2300 Whitney Ave., Hamden is assisting with the arrangements. Memorial donations in Jayne’s name may be made to the American Cancer Society.