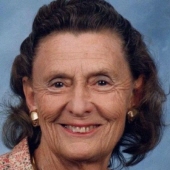 SOUTHINGTON-Jean A. Kemble, 92, wife of the late John Kemble passed away on Wednesday, March 29, 2017. She was born May 24, 1924 in Flushing, NY a daughter of the late Thomas and Constance (Loos) Adie. She spent her childhood in Scotland and was fortunate to sail on the last boat going to the United States from Great Britain around the beginning of World War II. Jean earned a bachelor's degree in speech from Queens College and was a longtime resident of New Fairfield, CT and Winter Park, FL. She was a selfless woman who dedicated her life to raising her three adopted children, volunteering in the community and being a lifetime member of the English Speaking Union. Jean recently shared that one of the highlights of her life was taking her 50th wedding anniversary trip, given by her children, with her husband John to England and Scotland to recapture childhood memories. Jean is survived by her daughter, Jennifer Bishop of Tennessee, a son; Bruce Kemble of New Fairfield, CT, seven grandchildren, Cheryl Kozlowski, David Kemble, Johnathan, Michael and Matthew Crewse, Whitney Bishop and Christian Bishop Jones as well as five great-grandchildren; Kaitlyn Crewse, Ella Grace Crewse, Shawn Kemble, Emma and Abby Kozlowski. She was predeceased by her daughter, Heather Woiciechowski. Funeral services and burial were private. The Beecher & Bennett-Flatow Funeral Home, 48 Cook Ave., Meriden has been entrusted with the arrangements.