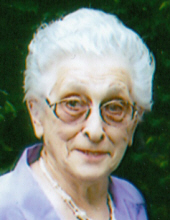 Jean A. (Maggio) Ortowski, age 94, passed away on April 8, 2020 at the Mary Wade Home in New Haven. Jean was born in New Haven on August 26, 1925 a daughter of the late Salvatore and Mary (Cavallaro) Maggio. She was the widow of Joseph S. Ortowski and sister to the late Mary Ornato, Madeline Kasprzycki, Faye Caley and Anthony Maggio. A life long resident of Hamden, she is survived by her son Joseph Charles Ortowski and his wife Laurene; her grandson Joseph Clifford Ortowski; and several nieces and nephews. Jean was an avid fan of Frank Sinatra, the UCONN Huskies Women's Basketball, New York Yankees, and the Oakland Raiders.The family would like to thank The Mary Wade Home for the exceptional care that Jean received. A special thanks to Mallery Rivera LPN, who Jean loved and adored. There was nothing that Mallery would not do for Jean, from taking Jean to her home for family gatherings or having her lunch with her every day. The bond they had was so special. A special thanks to CNA Lisa Simmons who cared for Jean like family. Jean always said Lisa was one of her dear friends. And for the so many special people at Mary Wade that loved and cared for Jean, we feel so blessed. Burial will be private and her Mass of Christian Burial will be held at a later date. Arrangements are in care of BEECHER & BENNETT FUNERAL HOME, 2300 Whitney Ave., Hamden. Contributions in Jean's memory may be made to the Mary Wade Home, 118 Clinton Ave., New Haven, CT 06513.