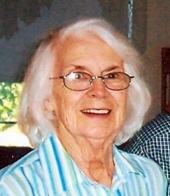 Jean Adams Nordstrom, 88 died peacefully on Sunday, February 24 surrounded by her loving family. She is survived by her best friend and devoted husband of 62 years, Robert Nordstrom of Meriden. Jean was born in East Orange, New Jersey in 1919 but spent most of her early life in New Hampshire. After a year of drama school in Boston, Jean transferred to the University of New Hampshire where she studied English and remained active in the theater. After graduating from the Univ. of New Hampshire in 1941, she enlisted in the Coast Guard and became one of the first female graduates of the Coast Guard Academy achieving the rank of Lieutenant. While stationed in Salem, Massachusetts she met and later married Robert Nordstrom in 1946. Jean and Bob resided in Meriden where they raised their four daughters. Jean was employed for many years as an educator in the Meriden school system and was highly respected in her field, receiving the Educator of the Year Award. She also was active in the community where she was a member of the Charity Club, College Club and several bridge clubs. Of all her accomplishments, Jean was most proud of her family. In addition to her husband, she is survived by her daughters and their families: Susan and Richard Seadale of Meriden, Sara and Peter Hance of Missoula, Montana, Kristi and Richard Ohanesian of Canton and Kathi and Tim Collins of Kensington. She dearly loved her eight grandchildren and three great-grandson in Ireland. A Memorial Service will be held on Thursday, February 28 at 6pm at the Beecher & Bennett-Flatow Funeral Home, 48 Cook Ave., Meriden. In lieu of flowers donations in Jean's memory may be made to the William G. Hennessy Scholarship Fund at the University of New Hampshire Foundation, 9 Edgewood Rd., Durham, NH 03824.