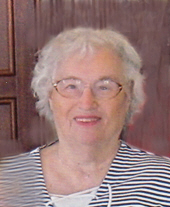 Jean Begley Owen passed away Friday, November 29, 2013, at St. Raphael Hospital of New Haven. Born in Bridgeport in 1924 and raised in Hamden, Jean learned to love music at an early age and began teaching piano in her mid teens. She continued teaching throughout her life, giving her final lessons only days before she passed away. Music was a life vocation that would span some 75 years. She loved her students and the lessons she gave, speaking fondly of both often. She also worked for many years as an educator and church musician, serving as organist and choir director for many churches in CT, MN, PA, GA, and especially NJ where she was a long term resident of Pennington. She earned a degree from Larson College and a MA in Music Education from Columbia University. Jean Owen is predeceased by her husband of 56 years, Goff Owen, Jr, in 2010. She is survived by her four children, Sherrill Farkas of Bethany, CT; Allison Abbate of Egg Harbor Township, NJ; Goff 'Skip' Owen, III of Ringgold, GA; and John G. Owen of Skillman, NJ. She is also survived by ten grandchildren: Jennifer and Daniel Farkas; Evelyn and Joseph Abbate; Chad, Blake, John, and Abigail Owen; and David and Daniel Owen; and two great grandchildren, Lillianne and Dylan Owen. The funeral will be conducted Monday, December 2, at 11:00 am, at BEECHER & BENNETT, 2300 Whitney Ave., Hamden. Friends may call Mon. from 10:00 am to 11:00 am. Interment follows at nearby Centerville Cemetery. Memorial contributions may be submitted to The Jean Owen Piano Lesson Scholarship For Adult Learners, care of All Things Musical LLC; 3210 Whitney Avenue; Hamden, CT 06518.