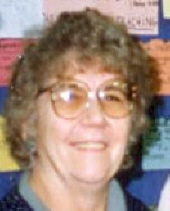 In Branford, March 24, 2010, Surrounded by her family, Jean E. Barker 83, of Eldridge St., New Haven passed away peacefully. Wife of John E. Barker Sr. for 63 years. Loving mother of Carolyn (James) Stephenson of Madison; John (Lynn) Barker Jr. of New Haven; Thomas (Betsy) Barker Sr. of Hamden; Janet (Robert) Baldino of Woodstock; Michelle (Michael) Calini of Clinton; and Leslie (David) Crescenzi of New Haven. Sister of Myra (Leroy) Schrump of Pomfret; Sister-in-law of Jean (Walter) Hanley; Walter (Dotty) Barker, William (Gloria) Elliott, and the late Donald (Norma) Barker, Frank (Jean) Elliott. Predeceased by a sister Lois (Harold) Ivey of Madison. Also survived by her cherished grandchildren Christopher Stephenson; Caitlin, Rebecca, and Thomas Jr. Barker; Danielle, Juliana, Jeremy, and Nathan Calini; Jenni, Stephanie, and Robert Jr. Baldino; Joshua Crescenzi; great grandchildren Alyssa, and Grayson Stephenson, and many nieces and nephews. Jean was born in New Haven, CT on April 6, 1926, daughter of the late Harry and Amy Wengolin. Jean attended Benjamin Jepson Elementary School, Fair Haven Middle School (as well as all of her children) and Hillhouse High School before attending the University of Connecticut where she graduated with a Bachelors Degree in textile design. Jean was devoted to her husband and raising their children. She especially enjoyed being with her grandchildren, whether during a visit or watching them in their many school, athletic, and musical activities. In her later years she was active with the Committee on Aging for the City of New Haven and received the State's Public Service Award for her commitment at the polls during the elections. Jean was an avid camper. She spent many summers at Hammonasset Beach State Park. Days were spent on the beach and swimming, and the evenings were spent around the campfire. An avid quilter and sewer, Jean always had her handwork with her. She worked on the New Haven Bicentennial Quilt which included a quilted block of the historic family home. She also enjoyed taking short drives around the state to see the local sites. She always said that 'she was truly blessed' by her family, but it was her family that was blessed. Friends may call Tuesday from 5-8:00pm at BEECHER & BENNETT FUNERAL HOME, 2300 Whitney Ave. Hamden. A memorial service will be held Wednesday at 2:00 p.m. at BEECHER & BENNETT FUNERAL HOME, 2300 Whitney Ave. Hamden. In lieu of flowers, contributions may be made to the American Heart Association, or the Robin I. Kroogman Animal Shelter in New Haven, CT.