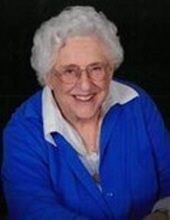 Jean F. Heston, 99, of Cheshire, passed away peacefully on November 27, 2019 in her residence at Elim Park. She was the beloved wife of the late George Heston. Jean was born in Worchester, MA on June 13, 1920, daughter of the late Duncan and Elizabeth (Adams) Ferguson. She graduated from Hillhouse High School in New Haven before going on to graduate in 1941 from Bryn Mawr College in Bryn Mawr, PA. Jean continued her education at Yale University where she earned her Master's Degree from the School of Public Health in 1946. In 1961, she received a Master's Degree in education from the University of Bridgeport. She worked on the Yale Faculty as a Research Associate in the Department of Epidemiology, School of Public Health until her retirement in 1982. She was a member of Spring Glen UCC in Hamden for over 50 years where she served in a variety of roles. A member of the local Bryn Mawr Alumnae Club, she was long active in their used book sales and book shop. She belonged to the North End Club and the New Haven Garden Club. She and George worked with great enthusiasm on several Garden Club conservation projects, including Long Wharf nature preserve. She moved to Elim Park in 2009 after George's death in 2007. Jean is survived by her daughters Margaret Greenwood (Jack) of Falls Church, VA, Lee Heston of New Haven, Jean Drendall (Lee) of Claymont, DE, and her grandson Todd Greenwood (Meredith) of Annandale, VA; and great-grandson Julian Greenwood. Friends and relatives are invited to a Memorial Service on Saturday, January 18, 2020, at 2:00pm, to be held at Elim Park, 150 Cook Hill Road, Cheshire. She will be laid to rest with her late husband George in Mount Carmel Cemetery, Hamden, in a private ceremony. In lieu of flowers, donations may be sent to Resident Benevolent Fund, Elim Park, 140 Cook Hill Road, Cheshire, CT 06410.