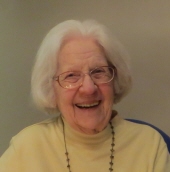 Jean L. Fedor, 92, wife of the late Edward Fedor, passed away at her home in Hamden on September 14, 2015. Born in Jersey City, NJ on January 31, 1923 to the late James and Helen Ferguson Anderson. Jean will be remembered as a loving mother to her sons and daughters-in-law, Edward & Mary Fedor of Elgin, IL, James Fedor of Bloomfield, NJ, and David & Jacqueline Fedor of Monroe, CT; a doting grandmother to her grandchildren, Jennifer, Michelle, & Kathleen Fedor and Daniel Boettinger and her great-granddaughter, Lilly Mae Ramirez. She was predeceased by her brother, James Anderson. She graduated from West Orange High School before graduating from Jersey City Medical Center Nursing School. After school Jean joined the U.S. Navy and proudly served her country as a nurse during WWII. Jean was an avid reader who more than anything, cherished time spent with her family. Friends may visit with her family on Saturday, September 19th from 11:00 to 1:00 p.m. followed by her Funeral Service at 1:00 p.m. at BEECHER & BENNETT, 2300 Whitney Ave, Hamden. Burial will be private.