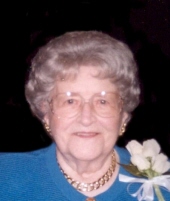 Jean V. Leary, 95, of 200 Leeder Hill Drive, Hamden, CT died peacefully on September 9, 2009. She was the wife of the late John J. Leary, Jr. and resided for many years at 450 Fountain Street in New Haven before moving to Whitney Center in 2002. Jean was born in New Haven on April 30, 1914 to the late Biagio and Adelaide Venditti. She attended New Haven schools and was a 1934 graduate of Albertus Magnus College. After an initial career in social work, she became the second Alumnae Secretary of Albertus in the late 1940s and early 1950s. Her lifelong ambition to teach was realized in 1955 when she became the first lay teacher at Sacred Heart Academy, where she taught Latin, French and Spanish for 25 years and later headed the foreign language department. After retirement from Sacred Heart, Jean developed and taught a conversational Spanish and French program for the 7th and 8th grade classes at St. Aedan School in New Haven from 1982-1989. She also was a visitor's receptionist at the Hospital of St. Raphael from 1973 to 1993, first as a volunteer and later as a part-time employee. Jean was an active member of the Alliance Francaise of New Haven for over 40 years and a member of both the Catholic Charity League and the New Haven Council of Catholic Women. She received the Albertus Alumnae Association award in 1957 and the Sacred Heart Academy Hearts of the Community award in 1998. Jean is survived by a son, John J. (Suzanne) Leary of Hamden and three grandchildren: Matthew (Hillary) Leary of Syosset, NY; Brian (Jill) Leary of Woonsocket, RI; and Maura Leary of Washington, DC. The last eight years brought the joy of six great-grandchildren: Irene, Keegan, Margaret, Spencer, Alexandria and Parker. She is also survived by a sister, Olga V. (A. Robert) Parente of Hamden and was pre-deceased by a sister, Letitia C. Venditti. Funeral from BEECHER & BENNETT, 2300 Whitney Ave, Hamden on Saturday Sept. 12, 2009 at 8:30 AM, followed by a Mass of Christian Burial at 9:30 AM in the Church of St. Rita. Friends may also visit with Jean's family on Friday from 4 to 7 PM at the funeral home. Interment will take place in St. Lawrence Cemetery in West Haven. In lieu of flowers, donations in her memory may be made to either the Albertus Magnus College Alumni Fund, 700 Prospect Street, New Haven (06511) or the Sacred Heart Academy Scholarship Fund, 265 Benham Street, Hamden (06514). Her family wishes to acknowledge the excellent and loving care provided by the administration and staff of the Whitney Center Health Center during the last years of her life.