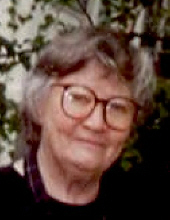 Jeanette Pagnam Lucibelli, 90, died peacefully on September 30, 2012 surrounded by her family. She was the beloved wife of 53 years to the late Andrew J. Lucibelli. Born in New Haven the daughter of the late Thomas J. Pagnam and Jeanette Schenck Pagnam Conway. After graduating from Larson Junior College, class of '41, she worked in the art department of SNET and General Electric. Later, she worked for Bank of New Haven and Travelers. Jeanette leaves two daughters, Jeanette (William) Compton and Elisabeth (Harley) Pretty both of Hamden; six grandchildren, Nette Compton (Josh)Price, Sarah Jane & Justine Compton, and Jenny, Harley Jr, & Trevor Pretty. She also leaves her nurse and friend, Louise Highsmith, who had also cared for her husband for many years. Years ago Andy and Jeanette along with their daughters spent many a happy summer day on the tennis courts of Owenego Club in Branford. Funeral from BEECHER & BENNETT FUNERAL HOME, 2300 Whitney Ave, Hamden, CT on Thursday, October 4th at 8:30 AM followed by her Mass of Christian Burial in St. Rita's Church, Hamden at 9:00 AM. Friends may also visit with her family at the funeral home on Wednesday evening from 5:00 to 8:00 PM. Burial to take place in St. Agnes Cemetery in Branford. To send a condolence please see obituary at www.beecherandbennett.com