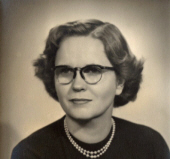 Jeanne Harbison Hein of Bethany; 94 -- BETHANY - Mrs. Jeanne Hein, 94, died peacefully after a long struggle with Alzheimer's disease on Saturday, July 6th at her home in Bethany, CT. Jeanne was born March 17, 1919 in Erie, Pennsylvania. She graduated from Strong Vincent High School with honors in 1936, serving as president of the school's National Honor Society chapter. She graduated from the University of Pittsburgh cum laude in 1940 and earned her Bachelor of Divinity degree from Yale Divinity School in 1954. Jeanne attended Sarah Hearn Memorial Presbyterian Church as a youth where she was very committed and active within the United Christian Youth Movement and its Pennsylvania chapter. She was nominated as a delegate and attended the World Conference of Christian Youth held in Amsterdam, The Netherlands in July 1939. She married Stanley Parker Harbison August 2, 1942. As a conscientious objector, and committed pacifist, Stanley was assigned by the Civilian Public Service Program to service in Castaner, Puerto Rico. Jeanne served as Missionary under appointment of the Presbyterian Board of National Missions 1943-48. Stanley and Jeanne administered a hospital and clinic serving the rural poor from 1943-45. Following the war, they continued their service in Guacio, Puerto Rico directed by the Presbyterian Christian Service in San Sebastian, Puerto Rico. With Stanley, she was Co-founder and Co-director of the rural reconstruction project serving the communities in and around Guacio. They also developed a conference center there to serve the churches of Puerto Rico. Returning to the US in 1948, Stanley served as minister of the First Church Christ (Congregational) in East Haddam, CT. He graduated from Yale Divinity School, B.D., June1952. One month later he died from polio. Jeanne served as Secretary to the Dean and Advisor to Women Students, Yale Divinity School 1954-57. She declined an offer from the Presbyterian Church to accept the post of Secretary of Foreign Missions' Missionary Personnel. She then dedicated herself to the care of her two sons and their great-grandmother. Following Mr. Harbison's death, in 1959 she married Yale Professor Norvin Hein whom she accompanied with their growing family on year-long sabbaticals in England and India in the early 1960s. While she was never ordained in the Christian Ministry, Jeanne received the Award for Distinction in Lay Ministry from Yale Divinity School in 1992. Jeanne also co-authored, with Rajam Ramamurti, The Earliest Missionary Grammar of Tamil, published by Harvard University Press in 2013 after an effort that spanned some 47 years. Beyond missionary work and research into the Age of Discoveries, Jeanne's adventurous nature expressed itself in travels to the Yukon, Hudson Bay and the Canadian Maritime provinces. She was also an avid UCONN Huskies Women's basketball fan. She dedicated much of her time, love and attention to the care of her daughter Margaret who was born with autism. Her tireless advocacy for persons with disabilities made an impact on public policy and programs. Jeanne is survived by her husband Norvin Hein, her children Stanley and Donald Harbison, Lisa, Chris and Meg Hein, and seven grandchildren. A Memorial Service will be held at First Church Christ, 511 Amity Road, Bethany, CT on Saturday, July 20, 2013 at 11:00 a.m. A reception will follow at the church. In lieu of flowers donations may be made to the Autism Society http://www.autism-society.org. Arrangements under the direction of Beecher & Bennett, 2300 Whitney Ave., Hamden.