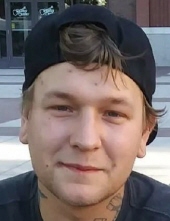 Jeremy Michael Biggs, 26, of Moodus, passed away on September 27, 2019. Born in Meriden on June 26, 1993, he was the son of Michael Biggs of Moodus and Audra Poirier of Meriden. Jeremy is survived by his maternal grandmother Mary Ann Poirier of Meriden, and paternal grandparents Frank and Marion Biggs of Wallingford; his sons Phoenix and Asher Biggs of Moodus; his sisters Aryana Poirier of Meriden and Shelby Biggs of Maine; and his brother Wyatt Biggs of Maine. A resident of Wallingford for many years, Jeremy was a graduate of Lyman Hall High School. Friends may visit with his family on Tuesday, Oct. 8th from 6 to 8 p.m. at BEECHER & BENNETT - FLATOW FUNERAL HOME, 48 Cook Ave., Meriden and may also attend his Graveside Ceremony on Wednesday at 10 a.m. in St. Stanislaus Cemetery, Meriden.