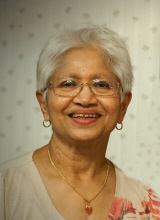 Jessy Elizabeth Thomas, age 72, of North Haven passed away on March 30, 2015. She was born on Sept. 10, 1942 in Johur Baru, Malaysia to Dr. K.O. Kurien and Sosanna Kurien and grew up in Malaysia and Kerala, India. She attended the Women's Christian College in Madras in 1960 where she was active in the Student Christian Movement, in dance, and in drama, for which she won several prizes. She went on to obtain a Masters with high honors in Sociology and Anthropology from Loyola College, Trivandrum in 1965 and later taught Sociology at Fatima College, Madurai. She married Rev C.V. Thomas in 1966 and had two children, Prem and Prakash. The family immigrated to Newport, Maine in 1976. She obtained a Masters in Counseling from the University of Maine and worked in crisis intervention, as a therapist for substance abuse, and in various clinical administrative roles. She was an integral part of her husband's work in ministry in the United Methodist Church, where she organized women's groups and a plethora of activities. For a few years she served the church as a national administrator in the Board of Discipleship. In whatever role she accepted, she excelled. Prodigiously energetic, organized, and fun loving, she connected easily with people and showered them with hospitality. She was known for her fabulous cooking and multi-course meals. She adored her grandchildren. Jessy is survived by her husband of 48 years, two sons Prem (Lisa) and Prakash (Shari), 6 grandchildren (Ezra, Benjamin, Abraham, Moriah, Gabriel, and Eva), brother, Tom Kurien (Shantha; Susan and Miriam), and sister Mary (K.Y. John; Ashish and Anish). A wake will be held on Friday, April 3 from 5 to 9 pm at Beecher and Bennett Funeral Home, 2300 Whitney Ave, Hamden, CT. The funeral service will be held at 11 AM Saturday morning, April 4, at the Hamden Plains United Methodist Church, 15 Church St., Hamden. Following the service, burial will take place at the Whitneyville Cemetery, 1200 Whitney Ave. A reception will follow at the Balcony Banquet Facility, 1349-1351 Dixwell Ave., Hamden.