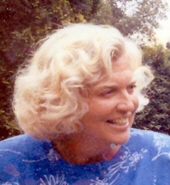 In New Haven, Tuesday, March 18, 2008, after a two year battle with amyloidosis, Joan Reiter Child, 70, of North Haven. Wife of Robert Coleman Child, III, mother of Sara C. Stevens and her husband Randy of Old Lyme, Robert Coleman Child, IV and his wife Patricia of East Haven and Emily C. Smith and her husband Charles of York, PA. Grandmother of Brittany A. and Nicholas R. Child, Benjamin M., Alexandra M., Jacob A. and Zachary C. Smith and Christopher R. and Ethan F. Bushy. Sister of Ardeith Reiter Froeberg, niece of Martha N. Sponheimer, age 100 of Lexington, MA and aunt of Patrick Keough, Patrick W. Child, Jr., Victoria Euler and Courtney Gettel. Joan was born in Greenwich, CT Jan. 24, 1938 to the late Arthur C. and Edith Noyack Reiter. She was a Registered Nurse and was a 1958 graduate of Grace-New Haven School of Nursing and worked at Yale-New Haven Hospital for 40 years before retiring. She was one of the founders of the Tibetan Spaniel Club of America, Inc. and an active member including President and held other offices in the club until her death. Joan and her business partner, Jean Wright, bred and showed several champions in shows across the country. She loved to read, knit, sew, paint, draw, swim, sit in the sun on the beach, shop, particularly at flea markets, where she had an uncanny nose for bargains, and most of all take care of her children and grandchildren. Not only does she leave behind her husband of 49 years, and her children and grandchildren, she also leaves a wide circle of friends, most particularly Janet Johnson and Sonny Esposito whom she met their first day of nursing school in 1955 and remained close with until her death. Joan was a member of the Trinity Lutheran Church Council, serving several terms, the most recent ending in January 2008. Joan had a talent for 'telling it like it is' without offending. She will be sorely missed by all, but most of all by her family. Memorial Service Sat., March 29 at 11 a.m. at Trinity Lutheran Church, 292 Orange St., New Haven. Arrangements under the direction of BEECHER & BENNETT, 2300 WHITNEY AVE., HAMDEN.