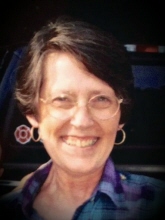 Meriden- Joanne (Rochette) Dobensky, 68, wife of James T. Dobensky passed away peacefully on Monday, October 12, 2015. Born in Meriden she is a daughter of Dorris (Hallbach) Rochette and the late Joseph Rochette. Joanne worked for many years for SNET and currently was the Office Manager for Dr. Jack Herrle. Joanne's many hobbies included crocheting, bowling, reading and spending time with her grandchildren. She was an avid Boston Red Sox and UCONN Women's Basketball fan. She looked forward to her yearly family vacations in Maine. Joanne was a past Worthy Advisor of the Meriden Chapter International Order of Rainbow for Girls and a two time Past Royal Matron for Westwood court #5 Order of the Amaranth. She was also a past Cub Scout leader for Den2 Pack 10 in Meriden. In addition to her husband James of 45 years, Joanne is survived by two sons and their wives, Jefferey (Lori) Dobensky of Meriden and James Dobensky and his estranged wife JoAnn Caruso of Wolcott and three grandsons, Thomas, Jeffrey and Kyle Dobensky. She also leaves two sisters Judy (Ray)Chapman Laselle of Suffield, and Jennifer (Christopher) Koshak of Cheshire and a brother, Joseph (Deborah) Rochette of Newington as well as numerous, nieces, nephews, and cousins. She was predeceased by a brother, Jonathan Rochette. The family would like to thank Dr. Hemdan and all the doctors, nurses and staff of Pavilion C at MidState Medical Center who took such great care of Joanne. A memorial service celebrating Joanne's life will be held on Saturday, the 17 of October, at 1:00 p.m. at All Saints Church, 252 Bound Line Rd., Wolcott, CT. There will be a private burial service with the family at a later date. In lieu of flowers donations may be made to Wounded Warrior Project, P.O. Box 758517 Topeka, Kansas 66675 or to Shriners Children's Hospital, 2900 North Rocky Point Dr., Tampa, FL 33607. The Beecher & Bennett-Flatow Funeral Home, 48 Cook Ave., Meriden has been entrusted with the arrangements.