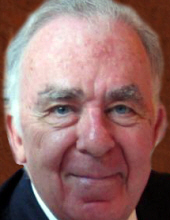 John 'Jack' Anthony Larkin, Jr., 83, of Hamden, husband of 46 years to Joyce Vischio Larkin, father of Erin Larkin, and father-in-law of Filippo Naitana, passed away at his residence on February 4, 2020. He was born in New Haven on November 10, 1936, son of the late John and Mary Millicent Kavanaugh Larkin, Sr. He is also survived by a brother, Robert Larkin (Joan) of Cheshire; a sister, Ellen Larkin Woodruff (Bruce) of Midlothian, VA; many loving nieces, nephews, grandnieces, grandnephews, and his special friend and dedicated caregiver, Denise Blackwell. Jack was a familiar voice to Connecticut sports fans for six decades. He was the morning man and sports director at WCNX-later WMRD-in Middletown and, along with Bill Glynn, broadcasted many local sporting events from 1964 to 2008. He graduated from Saint Mary's High School in 1954, and received a Bachelor's degree in Communications at Emerson College. He began his radio career at WWCO in Waterbury and then went to WCNX. Prior to being drafted, he moved to New York City, where he worked for Hearst Publications and tried every single lunch option offered at the Horn & Hardart Automat. He served in the US Army from 1960-1962, broadcasting over the US Armed Forces Korean Network. While in Daegu, he volunteered teaching English as a Second Language; there he made lifelong friendships that would bring him back to Korea long after his army discharge. When he returned to civilian life, he resumed his stint as the morning man at WCNX. He hosted the Sunday Morning Coaches' Report that ran every weekend from 1964-1975 and served as co-announcer for countless football, baseball and basketball games for Middletown high schools and Wesleyan University. He was very pleased to return to broadcasting in 2008 at the Middletown vs. Xavier Thanksgiving football game. Jack was inducted into the Middletown Sports Hall of Fame in 2011, in recognition of his long career supporting local sports. He continued to work in communications, first as an account manager for KC101/WAVZ, and then as circulation manager for the New Haven Register. After his retirement, he enjoyed many social pursuits, including serving as organizing member of the St. Mary's High School Class Reunion, acting as a companion for Lifetime Solutions in Guilford, and participating in several Fantasy Baseball leagues, as well as activities sponsored by the Knights of Columbus. He was a lifelong member of Our Lady of Mount Carmel Catholic Church, where he served as lector, teacher for the Children's Hour religious education program, and coordinator for the Annual Holy Family Men's Retreat. Funeral from BEECHER & BENNETT, 2300 Whitney Ave, Hamden at 9:00 a.m. on Saturday, February 8th with a Mass of Christian Burial in Our Lady of Mt. Carmel Church at 9:30 a.m. followed by his burial with Military Honors in St. Mary's Cemetery. Friends are invited to visit with his family at the funeral home on Friday evening from 4:00 to 8:00 p.m. In lieu of flowers, donations sent in Jack's memory to the Office of Radio & Television, 15 Peach Orchard Road Prospect, CT 06712-1052, would be very much appreciated. Jack was grateful to be able to watch the Catholic Mass on television thanks to this organization.