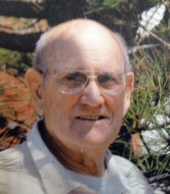 John B. Manfreda, 85, of Orange, devoted husband of 60 years to Marjorie Heinrich Manfreda passed away suddenly Monday, June 30, 2014; father of Dorothy Manfreda of Orange; Susan and her husband Michael Hanlon of Sherborn, MA, Edward Manfreda of Stamford, CT and Nancy and her husband Jim DeLuca of Mason,OH; brother of Robert Manfreda of North Haven; and loving grandfather of John Villa, Claire and Megan Hanlon, Lauren, Myles and Ava DeLuca. He was predeceased by his siblings, Mary, Joseph and Ralph Manfreda. John was born in West Haven, CT. Feb. 2, 1929, son of the late Nicholas and Antoinetta Manfreda, he was a Sergeant in the US Army from 1950-52. After he received his B.S. Degree in education from SCSU in 1955, followed by his Master's Degree in 1959, he taught elementary school in the town of Stratford for 32 years, retiring in 1989. John was active in Youth Services for the town of Orange. His tireless commitment to his wife, children, and grandchildren leaves an indelible impression on their lives. His memory will be cherished in their hearts forever. Memorial service Thursday, July 3 at 10 a.m. at BEECHER & BENNETT-TAYLOR FUNERAL HOME, 410 Campbell Ave., West Haven. Interment in Orange Center Cemetery.