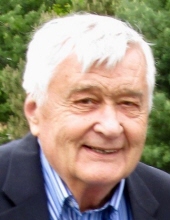 John Malmberg, beloved husband of the late Nancy (Agnes) Malmberg of Milford, passed away July 10, 2018. He was born in Cow Creek, KY on October 2, 1936, a son of the late Reverend Arnold and Emily Malmberg. A graduate of Hillhouse H.S., he earned a BS in Business Administration at the University of New Haven. Mr. Malmberg owned Commercial Furniture Services Corporation and later worked at GE Capital in Stamford. He is survived by his three children and their spouses, Ginny (Mark) Kozlowski of Milford, John (Lisa) Malmberg of Auburn, PA and Barbara Malmberg of East Haven. He is also survived by his loving grandchildren, Ashley & Nicholas Kozlowski and Justin & Sarah Malmberg, and siblings, Elisabeth Van Seters of Waterloo, Canada, Thomas Malmberg of Brimfield, IL and Eunice Murphy of Swansea, SC. He was predeceased by his brother David, formerly of Hamden. Friends may visit with his family on Saturday, July 14 between 10 a.m.-1 p.m. at BEECHER & BENNETT, 2300 WHITNEY AVE., HAMDEN. A Service of Celebration will be held at 12:30 p.m. Contributions in his memory may be sent to the American Red Cross.