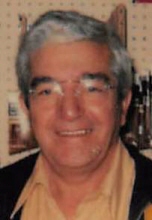 John DeFrancesco, age 93, of Hamden, passed away on December 29, 2016. John was born in New Haven on June 3, 1923, a son of the late John & Matilda (Esposito) DeFrancesco. He was the loving husband over 70 years of Betty Candela DeFrancesco, who passed away in 2015. John is survived by his beloved daughters, Bernadette Gilbert & her husband Arthur of West Haven and Maria Cusano of Colchester. Grandfather of Marisa Gilbert of East Haven and Philip Cusano & his wife Jessica of Colchester and great-grandfather of Dominic and Rocco Cusano. John was predeceased by his sisters, Carmel Silva and Vincenza 'Babe' DeFrancesco, his brothers, Sammy & Gaetano 'Ninnie' DeFrancesco, and his son in-law Richard Cusano. He was a truck driver and store clerk for Hoffman Paint, Devoe Paint and Sherwin-Williams Paint Companies over the years. John was always famous for his artistic cardboard creations. Friends may visit with his family at BEECHER & BENNETT FUNERAL HOME, 2300 Whitney Ave, Hamden on Tuesday, Jan. 3rd from 9:00 to 10:30 AM and may attend his Mass of Christian Burial that will be celebrated at 11:00 AM in St. Stephen's Church 400 Ridge Rd. Hamden. Interment will follow in All Saints Cemetery, North Haven. Contributions in John's memory may be made to SARAH-Tuxis Inc., 45 Boston St., Guilford, CT 06437.