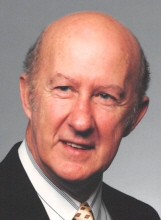 John Edmund Judd, 87, loving husband of 63 years to Joanne Petrelle Judd of Hamden, passed away peacefully November 27, 2017. Father of Robert Judd of Milford, Leslie Judd-Paier (Raymond) of Cheshire, and the late Bryant Judd (Leslie) of Newington. Adoring grandfather of Ashley, Trevor and Sarah Judd, and Christopher and Caitlin Paier. He was predeceased by a brother, Thomas Judd, and 4 sisters; Rita Zimbardi, Dorothy Mason, Irene and Muriel Judd. John was born in New Haven June 23, 1930, a son of the late Thomas F. and Grace Byrnes Judd, and had resided in Hamden since 1957. He served in the US Air Force with the 339th Fighter Squadron stationed in Japan from 1947- 1950. John graduated from New Haven College in 1959 with a degree in electrical engineering and earned an executive master of science in engineering management degree from the University of New Haven in 2003. He was President of Vibra-Metrics Inc. for over 30 years and later Dynamic Measurement Consultants, both in Hamden. He previously worked at MB Electronics as an international division sales manager. In 1989, John was a member of the American Aerospace Delegation to the USSR during their period of glasnost and perestroika, and was honored in 2014 for over 20 years of dedicated service with the Selective Service System. John had been a longstanding member of the Hamden Rotary Club and was passionate about the Amber Alert ID system for children. John served as chairman of the Private Industry Council for 10 years, was a board member of the Greater New Haven Chamber of Commerce, vice chairman of the National Alliance Business New Haven Metropolitan Council, and a member of the Connecticut Business and Industry Association, Vibration Institute, Greater New Haven Manufacturers Association (president, executive board), Institute of Environmental Sciences, and the Instrument Society of America. Funeral from BEECHER & BENNETT, 2300 Whitney Ave., Hamden Friday morning, Dec. 1, at 10:30 am. Mass of Christian Burial will be celebrated in Our Lady of Mount Carmel Church at 11 AM. Friends may visit with his family Thursday from 4-7 PM. Interment with Military Honors in St. Mary's Cemetery. Contributions in his memory may be made to the Hamden Rotary Foundation, P.O. Box 185304, Hamden, CT 06518.