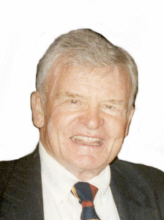 John Eugene Orie of Hamden, entered into eternal rest after a long illness at the Connecticut Hospice in Branford on Sunday, January 30, 2011, where he was surrounded by his loving family during his final days. Loving husband of 56 years to Vivian Tummillo Orie, he is also survived by daughters Linda Perfetto and her husband Pat of Mansfield Center, CT and Janice Gemmell and her husband Stephen of Hamden; grandchildren Joseph and Hope Perfetto and Victoria and Stephen Gemmell and brothers Robert of Leesburg, FL, James of Bristol, Thomas of Orlando, FL and Anthony of New Hartford. He was predeceased by a brother, Eugene Orie. A son of the late John Orie and Eva Adams Orie Valentine, John was born in Canton, CT on December 23, 1925 and resided in Hamden, CT for 53 years where he raised his family. He served in the US Navy during WW II, training as a Naval Aviator and later serving in the South Pacific aboard the USS Raymon W. Herndon. John attended St. Michael's College in VT, received a BA from the University of Miami, FL, attended Boston College School of Law and received a Master's Degree from Southern Connecticut State University. John worked as a casualty claims adjuster for area insurance companies for many years and retired from the State of CT as a Hearings Officer for the Dept. of Motor Vehicles. He was a Parishioner of Blessed Sacrament Church, where he served as a Eucharistic Minister and was active in several ministries there. Funeral from BEECHER & BENNETT, 2300 WHITNEY AVE., HAMDEN on Friday, February 4, 2011. Friends may visit with the family from 8:30 to 10:30 AM at the Funeral Home prior to a Mass of Christian Burial which will be celebrated at 11:00 AM at Blessed Sacrament Church, 321 Circular Avenue, Hamden, CT. Interment in All Saints Cemetery, North Haven will follow. In lieu of flowers, memorial contributions in John's name can be made to St. Jude Children's Research Hospital, 501 St. Jude Place, Memphis, TN 38105 or to CT Hospice, 100 Double Beach Rd., Branford, CT 06405.