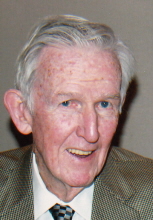 John F. Carey, 83, of Hamden, entered into eternal rest on March 5, 2014. He is now reunited with his beloved wife, Carol, of 56 years. He was born in New Haven January 17, 1931, son of the late David J. Carey and Anna Burke Carey. He grew up in Fair Haven and attended St. Francis School. Jack is survived by his sister, Maureen A. Carey, and sister-in-law Patricia C. Carey, both of Hamden. Jack leaves a daughter, Kathleen (Kevin) Cragin, of Newtown, three sons; Peter, of Hamden, John (Tara), of Wallingford, James (Terri), of Wallingford, and three grandchildren, Daniel Cragin, Ryan Carey, and Andrew Carey, in addition to nieces and nephews. He was predeceased by his brothers, David J. Carey, Jr. and Thomas V. Carey. Jack was a 1948 graduate of Hillhouse High School and later served in the U.S. Army during the Korean conflict. Jack was the owner and President of the Coe & Brown Co. for over 50 years. He enjoyed bowling, golfing, and traveling, especially to Ireland and Bermuda, and vacationing with his wife and family. He was a member of Our Lady of Mt. Carmel Parish and past President of the New Haven Country Club, and a longtime member of the Knights of Columbus and Knights of St. Patrick. Funeral from BEECHER & BENNETT, 2300 WHITNEY AVE, HAMDEN Saturday March 8, 2014 at 10:30 AM. Mass of Christian Burial will be celebrated at Our Lady of Mount Carmel Church, 2819 Whitney Ave. Hamden at 11:00 AM. Friends may visit with his family at the funeral home on Friday from 4-8 PM. Interment with Military Honors in All Saints Cemetery. In lieu of flowers contributions in his memory may be made to St. Francis School Fund, 423 Ferry St. New Haven, CT 06513.