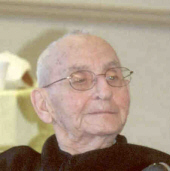 John Frank Smoko, CWO USAF Ret, age 93, of Hamden, passed away April 11, 2011. John was predeceased by his wife of 41 years, Elizabeth Aucoin Smoko. Born in Philadelphia, PA on July 3, 1917, he was a son of the late John F. & Anna Unterreiner Smoko and brother of the late Rudolf Smoko. Raised in Pocono Lake, PA, he graduated from Tobyhanna Township (PA) High School in 1935. Joined the US Army Air Corps in 1937 and served as a Communications Specialist. After several foreign tours of duty during WWII & Korean Conflict he attained the rank of Chief Warrant Officer, the highest enlisted rank in the USAF. Retiring from the military service in 1958, after 22 years of service he was employed by Branford Building Supply Co. as a Credit Manager from 1958 until 1982. He subsequently served as a Special Deputy Sherriff in the New Haven Superior Court from 1982 to 2000. John is survived by his daughter, Louise Ann Smoko Bozenhard of Rochester, NY; his sons, Francis M. Smoko & his wife Diane of Meriden and Ronald L. Smoko & his wife Angela of North Haven; grandchildren, Robert Smoko (Nancy), Ronald L. Smoko, Jr (Becca), Matthew Smoko (Allison), Steven Bozenhard & Susan Bozenhard and 3 great grandchildren. John was a former communicant of Blessed Sacrament Church in Hamden for many years and a member of Retired Officers Association of America. His funeral will leave from BEECHER & BENNETT FUNERAL HOME, 2300 Whitney Ave, Hamden on Thursday April 14, 2011 at 9:30 am, followed by a Mass of Christian Burial at 10:00 am in Ascension Church, 1040 Dunbar Hill Rd, Hamden. Friends may also visit with his family at the funeral home on Wednesday from 5:00 to 7:00 pm. Interment with Military Honors will take place in All Saints Cemetery, North Haven. In lieu of flowers contributions in his memory may be made to the American Red Cross, 144 S. Main Street, #4, Wallingford, CT 06492.