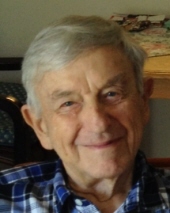 John Frederick Kotchian of Elim Park, Cheshire CT, December 10, 2014. John Kotchian was born on November 14, 1921 in North Dakota, where his grandparents homesteaded in the 1880s. He was the son of Arthur George Kotchian and Erma Belle Hunger. He was raised in Wisconsin, participated in Cub Scouts and Boy Scouts, and earned his Eagle Scout award. He loved the sound of brass and played the alto horn and then the French horn in high school. He attended the University of Wisconsin and played French horn in the marching band. He met his future wife, Winifred Rennebohm, at a dance there; they enjoyed so many dances during that Big Band era. After graduation in 1942, he received Navy midshipman training at Columbia and post-graduate training in communications at Annapolis. He served as communications officer for a destroyer squadron in the Pacific theater in World War II. After the war, John earned his MBA from Harvard Business School. Winnie and John were married in 1947. He spent his career as a district sales manager with Lincoln Electric, living in Cleveland, Chicago, Detroit, and Connecticut. After retirement from Lincoln Electric, he worked in industrial sales with Pearce Real Estate. Since boyhood, John loved and explored the natural world and the outdoors, and particularly enjoyed wilderness challenges. He made several canoe trips north of the 60th parallel, served as an instructor for whitewater canoeing, and taught his four children to hike, camp, ice skate, ski, canoe, and backpack. He showed them how to recognize the stars and constellations in the night sky, wax cross-country skis, make a fire with one match, change a tire, and drive on ice. He and Winnie spent many happy years skiing at Burke Mountain, Vermont. John was an inveterate NYT reader and was curious about sciences and the natural world. He taught cribbage to his family and loved to skunk his opponents every chance he got. He and Winnie traveled widely around the world, many of their trips centering on birding. He also enjoyed bridge, art, theater, and opera, and tried his hand at sculpture and painting. John was active in many civic activities. He was appointed to the North Haven Conservation Commission, served on the Quinnipiac River Study Committee, later the Quinnipiac River Watershed Association, and was instrumental in the cleanup of the Quinnipiac River in the 1960s. He and Winnie volunteered at the Yale Peabody Museum of Natural History, John serving as chair of the volunteer board. John also chaired the land acquisition committee of the Sleeping Giant State Park board, and was active in the New Haven Bird Club. He was President of the Hamden-North Haven YMCA board; the new building in Hamden was completed while he was on the board. He chaired the Whitewater Canoeing committee for the CT chapter of the Appalachian Mountain Club, and was a member of Spring Glen Church for many years, serving as an elder and on the minister search committee. He was a member of the American Welding Society, Toastmasters International, Kiwanis, and the High Lane Club. He enjoyed weekly hikes with his men's hiking group until he was in his late 80s. He is survived by his wife of 67 years, Winifred; son John and wife Regina of Middlebury, CT; daughter Sarah and husband Bob Nellums of Albuquerque, New Mexico; daughter Nancy Prentiss of Farmington, Maine; daughter Ann Lombard and husband Rob of Bridgton, Maine, and twelve grandchildren: Will, Jonathan, Elizabeth and Edwin Kotchian; Laura and Ross Nellums; Ben, Alex, and Sam Prentiss; Rob, Heidi, and Molly Lombard. There will be a memorial service held at Elim Park on January 10, 2015 at 11 a.m. in Nelson Hall. Donations may be made to The Sleeping Giant Park Association, P.O. Box 185340, Hamden, CT.