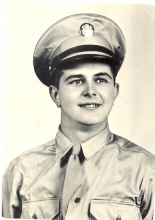 Meriden- John H. Carpenter, 86, husband of 63 years to Audrey (Ellstrom) Carpenter died on Tuesday, May 17, 2011 at the Conn. Baptist Home. He was born January 30, 1925 in Meriden a son of the late Howard and Viola (Barker) Carpenter. John proudly served his country in the U.S. Army during World War II; second armored division in Europe and the Battle of the Bulge. He worked for several small dairies in Meriden and later was a custodian for the Meriden Public School system. He was a life member of the Yalesville VFW, the Eastern Draft Horse Association and South Meriden Trinity United Methodist Church. John enjoyed fairs and horse pulling events, traveling all over the country and Canada. In addition to his wife, Audrey, he is survived a daughter, Karen (Edward) O'Neal of Meriden, two sons, Richard (Patricia) Carpenter of Windsor and Kenneth (Mary) Carpenter of Wallingford, four grandchildren, Steven and David O'Neal, Michele Bloom and Jeffrey Carpenter, eight great-granddaughters and a sister Marjorie McLarty of Meriden. He was predeceased by four brothers, Ralph, Kenneth, Henry and Arthur Carpenter, two sisters, Bernice LeHerissier and Bessie Iwanicki and a daughter-in-law, Leona G. (Cookie) Carpenter. A funeral service will be held on Friday, May 20, 2011at 11:00am at the Beecher & Bennett-Flatow Funeral Home, 48 Cook Ave., Meriden. Relatives and friends may call at the funeral home on Friday from 9-11am. Burial with military honors will be at the convenience of the family. In lieu of flowers donations may be made to the Conn. Baptist Home, 292 Thorpe Ave., Meriden, CT 06450.