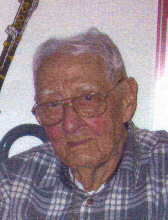 John H. Goodrich, Sr., 91, of Wallingford, passed away on September 8, 2011 at Yale New Haven Hospital after a long illness. He was born in Richmond, VA on October 2, 1919 to the late John H. and Florence Hubbard Goodrich, Sr. John had been married for 72 years to his beloved Alice Goodrich who passed away last April. John is survived by his daughter, Ruth Gertsch and her husband Charles of Killingworth; sons, John H. Goodrich, Jr. and his wife Barbara of Killingworth and William Goodrich and his wife Patricia of Mobile, AL; nine grandchildren and ten great-grandchildren. He was predeceased by a sister, Hazel Perkins. John had worked as an electrician for 30 years at Pratt & Whitney and is a proud WW II Veteran of the US Army. He was a member of the North Branford VFW, Adelphi- Momauguin Lodge #63 AF&AM, Corinthian Lodge #103 AF&AM, Golden Rod Chapter OES, Alice Chapter OES, and volunteered for many years at the Masonic Healthcare Center in Wallingford. His Funeral Service will be held at BEECHER & BENNETT, 2300 Whitney Ave., Hamden on Tuesday, September 13th at 10:30 a.m., followed by an interment with Military Honors at Beaverdale Memorial Park. Friends may visit with the family on Monday evening from 4 to 8 p.m. Also, on Monday evening at 7:30 p.m. a Masonic Service followed by an Amaranth Service will take place at the funeral home. In lieu of flowers contributions in John's memory may be sent to Masonic Healthcare Center, 22 Masonic Ave, Wallingford, CT 06492.