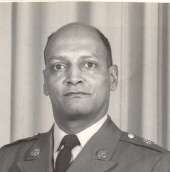 John Hilton Sands Jr., 79, of 516 Orange St., New Haven, passed away Friday, November 26, 2010 at Gaylord Hospital. He was the husband of the late Ingeborg Goeppel Sands, and was born in New Haven April 4, 1931 to the late John H. Sands, Sr. and Carrie Smith Sands. Mr. Sands proudly served in the U.S. Army from 1952 until he retired in 1973 as a Sergeant First Class. His tour of duty included Korea, Vietnam, Germany and France. He was employed at U.S. Repeating Arms for 15 years, and was a member of the V.F.W. and the American Legion. He was the brother of Gladys Vierra, Winifred Gifford and Arlene Elkins, and will be missed by a host of family and friends. Funeral Service will be held on Saturday, December 4, 2010 at 10 A.M. in the BEECHER & BENNETT FUNERAL HOME, 2300 Whitney Ave, Hamden. Friends may call from 9:00-10:00am. Interment with Military Honors in Centerville Cemetery, Hamden.