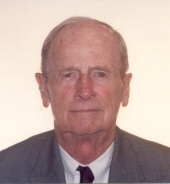 John J. Kennedy, 85, of Orange, beloved husband of 61 years to Ruth Ruggiero Kennedy, passed away on December 1, 2009. He was born in Waterbury on May 30, 1924 to the late Peter and Helen McMahon Kennedy. Besides his wife, John leaves his children and their spouses, RuthAnn and Paul Sachs of Newbury, VT, Mary Jo and Bruce Jolma of Clatskanie, OR, John Jr. and Sandra Kennedy of Cheshire, Robert and Ann Kennedy of Kennebunk, ME, Peter and Denise Kennedy of Durham, and Katherine Kennedy of Wallingford; fifteen grandchildren; one great grandchild; sister, Helen Kennedy of Hamden; brother, William Kennedy and his wife Patricia of San Diego, CA. He was predeceased by a brother, Peter Kennedy. John was a graduate of Hillhouse High School class of '42 and Yale University class of '45W. He proudly served his country as an Officer in the U.S. Navy having been in the South Pacific, Japan, and China. He was employed by Blue Cross Blue Shield of CT for 30 years. While in their employment, he was Secretary of the Board of Directors and Senior VP of marketing. Then for the next 25 years, until his retirement in 2006, he was the Secretary and Senior VP of the Eighteen Seventy Corporation in New York. Over the years John has served on many boards and been a member of many clubs; Past President, Life Member, and secretary for many years of the Quinnipiack Club, Morys Association, Past President of the New Haven Kiwanis Club, Racebrook Country Club, and Chairman of the Board at Saint Regis Health Center. Funeral from BEECHER & BENNETT- TAYLOR FUNERAL HOME, 410 Campbell Ave., West Haven on Saturday, December 5th at 9:15 am, followed by a Mass of Christian Burial at 10:00 am, in Holy Infant Church, 450 Racebrook Rd., Orange. Interment with Military Honors will take place at Mt. St. Peter's Cemetery in Derby. Friends may visit with his family on Friday evening at the funeral home from 4 to 7:00 p.m. Contributions in John's memory may be made to the charity of ones choice.