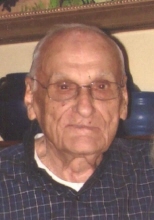 John 'Jack' C. Papeika, 97, beloved husband of 70 years to Nell Lekas Papeika, of Hamden, passed away on February 7, 2011 at the CT Hospice in Branford. He was born in New Haven on October 14, 1913 to the late Sylvester and Victoria Papeika. Besides his wife, Jack is survived by his daughters, Janice Thibodeau and her partner Carmen Vance of Columbia, Lynne Langella and her husband Donald of Branford; brother Al Papeika of Hamden; Granddaughters, Dana Dunnack and her husband Pete of Lebanon and Gillian Langella of Charleston, SC; great-grandchildren, Olivia, Grace, Matt and Drew Dunnack and many nieces and nephews. Pre-deceased by his brothers Stanley and Robert Papeika. Jack was a kind and quiet man who was very devoted to his family and enjoyed family gatherings. He always loved being around the water and enjoyed fishing and boating. Before his retirement, he was employed as upper level management for British Petroleum (BP). Funeral from BEECHER & BENNETT, 2300 Whitney Ave., Hamden, on Friday, February 11th at 9:15 a.m. Mass of Christian Burial will be celebrated at Blessed Sacrament Church at 10 a.m. Friends may visit with the family at the funeral home on Thursday evening from 4 to 7 p.m. In lieu of flowers, contributions in Jack's memory may be sent to CT Hospice, 100 Double Beach Rd., Branford, CT 06405.