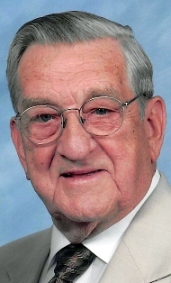 John “Jack” Harold Gade, 97, husband of the late Hedwig Gudrian Gade, passed away at the Bradley Home on July 31, 2022. A lifelong resident of Meriden, he was born on April 8, 1925 to the late Richard and Clarice Nevin Gade. As the Gade family were founding members of Immanuel Lutheran Church, Jack grew up in the parish and became an active member of the church community. Jack’s trade was in Tool & Die having worked for Eyelet Specialty Co. in Wallingford and Pye Hogan in Meriden. He was also a lifetime member of the Meridian Lodge #77. An active man, Jack and Hedwig enjoyed many adventures while on cruises and traveling around Europe.
Jack will be lovingly remembered by his nephews and nieces, Richard (Judy) Dickinson, Lawrence Knowles, Karen Lindsey, George Knowles, Linda Salter, Gary Dickinson, Sandra Gade, and many great-nieces and great-nephews. He was predeceased by his siblings, Dorothy Dickinson, Clarice Knowles, Norman Gade and Lawrence Gade. His family would like to thank the Pavilion Staff at the Bradley Home for their years of caring for Jack, supporting not just him but his family, and for making his time with them feel like home.
Friends and family are invited to a Graveside Service on Saturday, August 13th at 10:00 a.m. in Walnut Grove Cemetery. BEECHER & BENNETT-FLATOW FUNERAL HOME, 48 Cook Ave., Meriden in care of arrangements.