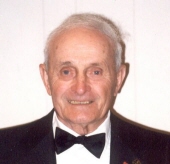 John Joseph Jurkiewicz, 93, beloved husband of 67 years to Virginia Menasian Jurkiewicz, of Hamden passed away peacefully July 31, 2010. He was born in New Haven December 22, 1916 a son of the late Martin and Amelia Judnyak Jurkiewicz, and resided in Hamden since 1983. John graduated from Hillhouse H.S. in 1936 and proudly served in the US Army during WW II as a 2nd Lieutenant with the 10th Mountain Div. He was co-owner of the Menasian Rug Co. of New Haven, a member of the Hamden Plains United Methodist Church, and the Hamden Elks B.P.O.E. # 2224. In addition to his wife he is survived by his sons, David (Beverly) Jurkiewicz of Hamden, John (Michele) Jurkiewicz of Meriden, 2 grandsons Michael (Danielle) Jurkiewicz of Guilford, Gregg (Jennifer) Jurkiewicz of Belmont, MA., a great-grandson, Aaron David Jurkiewicz of Belmont, MA. He is also survived by several nieces and nephews. Mr. Jurkiewicz was predeceased by 2 sisters Mary Gawlowicz, Stephanie Owen, and 4 brothers, Walter, Stanley, Nicholas, and Edward Jurkiewicz. Friends may visit with his family at BEECHER & BENNETT, 2300 WHITNEY AVE., HAMDEN Wednesday, August 4, from 4-7 p.m. Funeral service will be Thursday at 10 a.m. in the Hamden Plains United Methodist Church. Interment with military honors will follow in Beaverdale Memorial Park. In lieu of flowers contributions in his memory may be sent to the Hamden Plains United Methodist Church, 15 Church St. Hamden, CT 06514, or to the Hamden B.P.O.E. # 2224, 175 School St. Hamden, CT 06518.