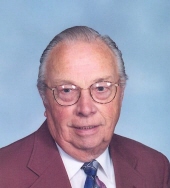 John L. Arnold, 87, husband of 61 years to Conna Mae Brooks Arnold, of Mattabasset Drive, Meriden, CT passed away Oct. 27, 2010 after a brief illness. He was born in Catawba, OH May 8, 1923 a son of the late Pearl and Mary Jewett Arnold, and resided in Ohio before moving to Meriden in 1972. He proudly served in the US Army during WW II with the 101st MP Batallion in Italy from 1943-1945. Mr. Arnold was employed as a manager with the Thompson Grinder division of the Waterbury Farrel Co. until 1986 and then with the Edro Mfg. Co. until 1989. He was a 60 year Mason having been Master of the Mechanicsburg Lodge #0113 F & A.M. in Ohio, and in Meriden he has been a long time member of the Meridian Lodge # 77 A.F. & A. M. John also was a member of the Arabian Shrine Club, Meriden, the Ancient Accepted Scottish Rite, Lodge Council Chapter Consistory, Valley of Dayton. He enjoyed playing golf in the Waterbury Farrel golf league, the NY Yankees, Ohio State football, and meeting his buddies for coffee. In addition to his wife, he is survived by his sons, Gregory Brooks Arnold and his wife Judy of Centerville, OH, Gary L. Arnold of Meriden, and two grandchildren, Carly Brooks Arnold and Garen Jay Arnold. He was predeceased by a sister Christina Standley. Friends may visit with his family on Saturday Nov. 6, from 5-7pm at Beecher & Bennett-Flatow Funeral Home, 48 Cook Ave. Meriden, CT. A Masonic Service will be followed by Military Honors presented by the Antique Veterans of Meriden. His family would like to express their gratitude to the staff at Mid-State Medical Center, Meriden Care Center, and special thanks to the Franciscian Home Care. In lieu of flowers contributions may be sent to the Alzheimers Assoc., CT Chap., 279 New Britian Rd. Suite 5, Kensington, CT 06037.