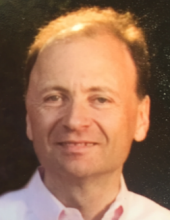 John M. Donohue, 56, of Hamden, passed away peacefully at his home on January 16, 2019, after a long battle with ALS. John was born in New York City on June 30, 1962 and raised in Hamden, Connecticut. He was the son of Martin Donohue & Mary 'Pat' (Cahalan) Donohue of Hamden. John is also survived by his sisters, Maureen Donohue of Cambridge, MA and Patricia D. Fredette & her husband Eric of West Hartford, CT and his nieces Kaitlin & Megan Fredette, who were the lights of his life. John graduated from the University of Colorado Boulder, later returning to Hamden where he was employed as an Administrative Assistant in the Business Office at Yale University for 25 years. John had a love for the outdoors, from climbing on Mount Everest and Patagonia to exploring the glaciers of Alaska. Above all, John's true happiness was bicycling; whether it was riding every chance he got, repairing bicycles or watching the Tour De France every year, this was John's true passion in life. Remembered for his keen sense of humor, generosity, and selflessness, John was loved by many. A special thank you to the Hospice staff; especially Erin and Nancy who showed genuine kindness and love to John, Len Engel who read to John weekly, Peter Morris and Martin Keniry for being wonderful friends to John, and most of all to Michael Kum, a gift from God who took care of John around the clock for three and a half years and knew his every need. His funeral will be held from BEECHER & BENNETT FUNERAL HOME, 2300 Whitney Ave, Hamden on Wednesday, Jan 23rd at 10:00 a.m. followed by his Mass of Christian Burial to be celebrated at 11:00 a.m. in St. Rita Church, 1640 Whitney Ave. Friends may also visit with his family on Tuesday from 4:00 to 7:00 p.m. at the funeral home. Interment will take place in St. Mary's Cemetery, Hamden. Contributions in John's memory may be made to ALS Association, 4 Oxford Rd, Milford, CT 06460 or to Conn. Hospice Inc., 100 Double Beach Rd, Branford, CT 06405.