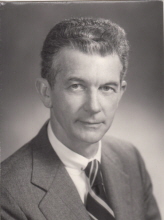 John Morgan Lyons, Sr., 92, husband of 55 years to the late Cecilia Pichnarcik Lyons, passed away Jan. 20, 2013 after a brief illness.He was born in New Haven, Feb. 16, 1920 a son of the late George W. Lyons, Sr. and Emma Muggleton Lyons and was a Hamden resident since 1953. After serving in the US Army during WW II, he was employed in his family's business, The Bilco Company until 1986 when he retired as Chairman of the Board. Mr. Lyons was very active in his community having been a long time member of the Lions Club and involved for many years on St. Rita Church and St. Rita School councils. He served as a board member of several organizations, including the New Haven Savings Bank, Junior Achievement, Literacy Volunteers of New Haven, Sacred Heart Academy and the Clelian Adult Day Care Center. He was awarded the honorary degree of Doctor of Humane Letters from Albertus Magnus College in 2001. He is survived by his children; Sheila Wallace of Lakeville, MA., Pamela (John) Griffin of Madison, Cynthia (Steven) Sullivan of San Jose, CA, Catherine Lyons (Chip Caton) of Bloomfield, Linda (Christopher) Ruzzi of Stamford, Janet (David) Fowler of Hamden, Deborah (Daniel) Cavanaugh of Shrewsbury, MA, Karen (Sean) Aherne of Shrewsbury, MA, John M. Lyons, Jr. of Larchmont, NY, Brian A. Lyons of New Haven, Rodney T. Lyons of Hamden. Brother of Robert J. (Nancy) Lyons, Sr. of North Branford, William C. (Barbara) Lyons, Sr. of Branford. He is also survived by 13 grandchildren, and 32 nieces and nephews. In addition to his wife, he was predeceased by a daughter Susan Elizabeth Lyons, a sister Dorothy Joyce Berg, and brothers George W. Lyons, Jr., and Edward F. Lyons, Sr. The family would like to thank long-term caregiver, Michael Larbi, and the wonderful staff at Evergreen Woods Health Center for their loving care. Funeral from BEECHER & BENNETT, 2300 WHITNEY AVE., HAMDEN, Thursday, Jan. 24, at 9:30 AM. Mass of Christian Burial will be Celebrated in St. Rita Church at 10 AM. Friends may call Wednesday from 4-7 P.M. Interment in St. Mary Cemetery. In lieu of flowers contributions may be sent to the Clelian Adult Care Center, 262 Benham St., Hamden, CT 06514, or to St. Rita School, 1601 Whitney Ave., Hamden, CT 06517.