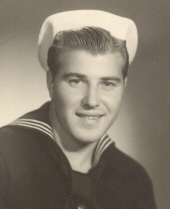 John Philip Pieper, 83, of North Haven, passed away at his home on November 21, 2006. He was a kind, honest, generous man who loved his family more than anything else in life. Husband of the late Phyllis Tuscano Pieper, father of William J. Pieper and his wife, Jean of North Haven, and John P. Pieper, Jr. and his wife, Nadine of Middletown, brother of George Pieper and his wife, Phyllis of North Haven, Clarisse Miessau and her husband Robert of Northford, and Carolyn Young of Wallingford; brother-in-law of Mary Pieper of Cheshire; grandfather of SGT Karl Pieper (101st Airborne Division) of Clarksville, TN, Lauren, Philip, Rebecca, Ian, Cassandra, George, and Alyssa Pieper, and Erin White of Bradenton, FL. John was predeceased by his brothers, Richard, Frank, Otto, Victor, Joseph, and Robert Pieper, and sisters, Matilda Werle and Louise Trzpis. John was born in New Haven, Aug. 4, 1923, a son of the late Otto and Louise Ludwig Pieper. He served his country in the US Navy during WW II from 1944-1946 on the USS YMS66, a minesweeper in the Pacific. John worked for over 30 years for Hall Brothers Hatchery in Wallingford, and then for over 10 years with DiChello Distributors in Orange. He was a great bowler, and loved to sing to his grandchildren with his wonderful voice. As John would say to everyone, 'Don't say goodbye, say see you later,' we'll continue to take that good advice. Funeral from BEECHER & BENNETT, 2300 Whitney Ave., Hamden Sat., Nov. 25 at 9:15 a.m. A Mass of Christian Burial will be celebrated in St. Francis Cabrini Church, North Haven at 10 a.m. Interment in Center Cemetery, North Haven. Friends may call Friday from 5 - 8 p.m. Based on the outstanding care that John received over many years, memorial contributions may be sent to the Development Office, MidState Medical Center, 435 Lewis Avenue, Meriden, CT 06451.