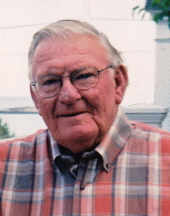 John Schuyler Hart, 81, of Hamden, husband of Patricia Hughes Hart, passed away on October 12 at Whitney Manor. He was born on November 12, 1932 in Bridgeport, Connecticut and grew up in Pittsfield, Massachusetts. John graduated from Northfield Mt. Hermon and from Amherst College in the class of 1955. He served in the U.S Army in Korea from 1956-1957. John worked at the John Hancock Insurance Company for 25 years as the General Agent in charge of the Hamden office. He went on to own a successful Bailey Employment Agency and worked until retirement as a consultant at IMI in New Haven. He was a member and past President of the New Haven Country Club and a longtime board member and past President of the Easter Seals Goodwill Industries in New Haven. John was an avid golfer, but was happiest doing driving of a different kind - cars! He drove for Hertz for over 10 years and could tell you 10 different ways to get to Port Newark. Most of all, he loved being at home with Patricia, his wife of 62 years. Many say that they 'broke the mold' with John. He had a big personality, he was compassionate, and he had a great sense of humor. Besides Patricia, John is survived by his daughter and son-in-law, Laurie and Sam Docknevich of Hopkinton, Massachusetts; his two sons and their wives, Robert and Donna Hart of North Branford, CT and Scott and MaryAnn Hart of Gilford, New Hampshire; and his seven grandchildren, Kate, Eric, Rob, John, Kyle, Michael, and David. He was predeceased by his sister Suzanne. Friends may visit with his family from 4-7 PM on Wednesday, October 15 at BEECHER & BENNETT, 2300 Whitney Avenue, Hamden. Funeral service and burial will be private. In lieu of flowers, the family asks that donations be made to the SARAH Foundation, www.sarahfoundation.org , 246 Goose Lane, Suite 104, Guilford, CT 06437.