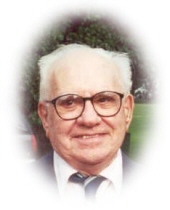 John Thomas Malatesta, 87, beloved husband of 68 years of Elva Bowers Malatesta of Washington Ave., Hamden passed away Sunday July 8, 2007 after a brief illness. Mr. Malatesta was born in Allentown, PA, March 31, 1920 a son of the late Thomas J. and Lydia Garbaccio Malatesta and was co-owner, with his wife, of American Appliance Parts of Hamden since 1945. He was a communicant of Our Lady of Mount Carmel Church, was chairman of the church carnival, and past president of the Holy Name Society. Active in the Hamden community he served on the Zoning Board of Appeals for 15 years, was a member of the Hamden Auxiliary Police Dept., American Legion Post # 88, was Past Grand Knight of Carmel Council #3605, Knights of Columbus, and was coordinator for Rep. Lawrence DeNardis. Mr. Malatesta also was a Commissioner with the CT. Dept. of Public Transportation, and served in th US Navy during WW II. He was a member of "NAPSA" and travel extensively around the world with that association, and he enjoyed hunting, duck pin bowling, flying his Cessna, and the many happy times at the summer retreat in New Hampshire. In addition to his wife, Mr. Malatesta is survived by daughters, Betty Corso of Hamden, Margie Carrano and her husband Frank Carrano of Wallingford, a sister Florence Levesque of Branford, 9 grandchildren, 13 great-grandchildren, and many nieces and nephews, and cousins. He was predeceased by 2 sons, J. Edward and Thomas J. Malatesta and a brother, Benjamin Malatesta. Funeral from BEECHER AND BENNETT, 2300 WHITNEY AVE., HAMDEN Thursday morning July 12, at 9:30. Mass of Christian Burial will be Celebrated in Our Lady of Mount Carmel Church at 10 a.m. Friends may call Wednesday from 5-8 p.m. Interment with Naval Military Honors in St. Mary Cemetery. Memorial contributions may be sent to the Multiple Sclerosis Society, 1155 Silas Dean Highway, Wethersfield, CT 06109-4301.