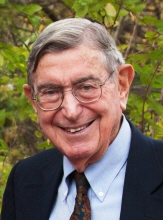 John W. Barnett died peacefully on Thursday, August 10 at the age of 89 at his summer home on Swans Island, Maine. John was born in Lakewood, Ohio on August 26, 1927 to Harold and Nellie Barnett. He served in the U. S. Army at the tail end of World War II, and attended Oberlin College and Harvard Law School. In 1950 he married Elizabeth D. (Betsy) Sargent, who died in 2001. They moved to North Haven and he joined the New Haven law firm of Wiggin and Dana, where he was a partner for over fifty years. He generously gave his time to North Haven town government, school and charitable organizations as well as to those in the larger New Haven community, such as the United Way. He was a longtime member of the Church of the Redeemer, The New Haven Lawn Club, and The Quinnipiack Club. He was also a member of the New Haven Investment Club, the State Bar Examining Committee, the Benchers, and the Social Science Club. John married Helen Sheffer in 2005. Following her death in 2008, he married Elizabeth S. (Libby) Mills and moved to Westminster West, Vermont, where he joined the Vermont State Bar Association. He served on the board of Senior Solutions, the Westminster Town Planning Board, and did pro bono legal work for other non-profits and members of the community. Throughout his life, John enjoyed tennis, travel, photography, and spending time with friends and family in Maine and on Cape Cod. He was particularly passionate about reading and baseball. Family, friends and colleagues appreciated his intelligence, wit and generosity, along with his wise counsel and considered opinions. He is survived by his wife Libby and his children, Elizabeth D. Barnett and Suleiman Mustafa Kutana of Sharon, Massachusetts, Priscilla and Andrew Mainardi of Montclair, New Jersey, and John and Denise Barnett of Ocoee, Florida; his eight grandchildren Alexander, Samlau and Leila Kutana; Wendy, Anne and Carolyn Mainardi, John, Ushi, and Brian Barnett; and his stepson Matthew Mills. A memorial service and celebration of his life will be held at the Church of the Redeemer, Cold Spring Street and Whitney Avenue, New Haven, on Friday, September 8, 2017 at 11 o’clock am, followed by a reception at the New Haven Lawn Club. A memorial gathering will also take place on September 24, 2017 at 4 o’clock pm at the Congregational Church of Westminster West, in Westminster West, Vermont. In lieu of flowers, donations in John’s memory can be made to Westminster Cares, 3534 US-5, Westminster, Vermont 05158; the Church of the Redeemer, 185 Cold Spring St., New Haven, Connecticut 06511; or a charity of your choice.