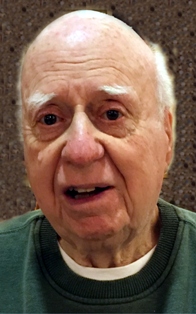 John William Seipold, 94, passed away on December 11, 2021 at Yale-New Haven Hospital. He was born June 2, 1927 to William J. and Irene (Knittel) Seipold. After growing up in the Morris Cove section of the city he graduated from Hillhouse High School in 1945. He then served in the U.S. Army before returning to New Haven to begin a 40-year career in banking. Most of his work was with First New Haven National Bank, and later Connecticut National Bank, becoming a Vice-President and Manager of their West Haven branch. After retiring from that firm he finished his career with Orange National Bank and Connecticut Bank & Trust.
In 1954 he married the now-deceased Dorothy (Thomas) Seipold, and together they resided in West Haven for over 30 years. Jack, as he was known to family and friends, was a devoted family man who always placed others ahead of himself and volunteered much time and effort to civic and charitable organizations in his community. He was a member of the West Haven Rotary Club and served as treasurer to several local chapters of fundraisers including March of Dimes and Jimmy Fund. He was a board member for the West Haven Public Library and the West Haven Community House, and a trustee of St. Lawrence Church. In later years he lived in Hamden, served as treasurer of the Meadowbrook II Co-op Association and enjoyed tending to his plots in the community garden. Most recently he resided at Branford Hills Health Care Center.
He is survived by his son, Paul T. Seipold of Hamden, his daughter-in-law Ellen Seipold of Branford, and his grandson, Paul W. Seipold of East Haven. In addition to his wife he is predeceased by another son, James Seipold, his sister Audrey Fenske, and his twin brother Joseph “Ted” Seipold.
A Mass of Christian Burial will be held on Friday, December 17th at 9:30 a.m. directly at Our Lady of Mt. Carmel Church, 2819 Whitney Ave., Hamden. Interment will immediately follow at Oak Grove Cemetery, 871 Campbell Ave., West Haven. In lieu of flowers donations may be sent to the Branford Hills Memorial Fund, 189 Alps Road, Branford, CT 06405. Beecher & Bennett Funeral Home, 2300 Whitney Ave., Hamden, is in charge of arrangements.