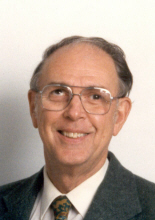 John Ward Putney of North Haven passed away on March 24th after a brief illness. He was born in Guilford, CT on August 13, 1928 and was the son of the late Frank T. Putney and Margaret Jane Ward. John was the beloved husband of Dorothy Gaetano for 57 years, and the loving father of Donna Scasino and her husband John of North Haven, and Keith Putney and his wife Cindi of Southbury. He was also the proud grandfather of John N. and Sara Scasino, Shelley Scasino, Cameron Putney and Evan Putney and the extra special great-grandfather of Elaina Rose Scasino. He attended Wooster Tech in Massachusetts , graduated from Quinnipiac College and is an Alumnae of Quinnipiac University. He began a career in banking in 1949 at Union and New Haven Trust Company/Union Trust Company as a teller, became the head of the Tax Department and later was an Assistant Trust officer. He retired after 42 years of service but continued to work in the Tax Department at 1st Fidelity/First Union, was a bookkeeper for the New Haven Historical Society and most recently was office manager for Rayhnem Inc. He was a member of the North Haven Civitan Club, parishioner of St. Therese Church, served on the Town of North Haven Commission for the Aging and was co-chairman of the St. Therese Ladies Guild Craft Fair, and an avid fan of the UCONN Women's Basketball team. John and his wife enjoyed traveling during their retirement years, especially to visit family in Minnesota , Wisconsin , Florida , Texas and most recently on a cruise through the Panama Canal . Funeral from BEECHER & BENNETT, 2300 WHITNEY AVE., HAMDEN, Tuesday morning, March 30 at 9:15 AM. A mass of Christian burial will be celebrated at St. Therese Church, North Haven at 10 AM . Friends may call Monday from 5-8 PM. Interment in Alderbrook Cemetery , Guilford, CT. In lieu of flowers, memorial contributions may be made to the Leukemia Society of America, 300 Research Parkway, Ste. 310, Meriden, CT 06450 or the American Diabetes Association, 306 Industrial Park Rd., Ste. 105, Middletown, CT 06457.