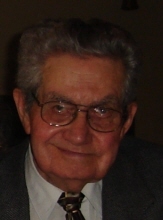 Jose Gonzalez, 84 husband of Nieves Mercado Gonzalez passed away on Sunday, September 21, 2008 at home surrounded by his family. He was born November 26, 1923 in Aguada, Puerto Rico a son of the late Serapio and Petra (Cordero) Gonzalez. He was a resident of Meriden since 1952. Until his retirement in 1986, Jose had worked as a machinist for New Departure in Bristol. He loved to fish, to dance, the New York Yankees and was a member of the Meriden Senior Center. Besides his wife Nieves of 55 years, he is survived by a daughter and her husband, Nivea and Angel Chaparro of Meriden, two sons and their wives, Jose and Rosa Gonzalez of New Britain, and Alberto and Evelyn Gonzalez of Middletown and six grandchildren, Deanna and Amaris Chaparro and her fiance, Brenden Kelleher, Ryan Gonzalez, Justin Gonzalez, Kristina Gonzalez and Jilline Gonzalez. He is also survived by three brothers, Moises and Bienvenido Gonzalez both of Puerto Rico and Raul Gonzalez of New York and one sister, Patria America Galloza of Puerto Rico as well as many nieces and nephews. He was predeceased by a brother, Ramon Gonzalez and three sisters, Celia Galloza, Margarita Gonzalez and Margarita Roman. The family would like to thank the Meriden VNA and Hospice for their care and compassion over the last several months. Funeral service Wednesday, September 24 at 11:00 a.m. at the Beecher & Bennett-Flatow Funeral Home, 48 Cook Ave., Meriden. Burial will follow at Walnut Grove Cemetery. Relatives and friends may call at the funeral home on Tuesday, September 23 from 4-8 p.m.