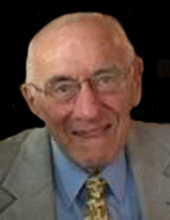 Joseph A. Fiore, Jr., 91, of North Haven, loving husband of 65 years to the late Mary Lou Gaetano Fiore, passed away November 25, 2019 after a brief illness. Beloved father of Denise J. Fiore of Clinton and Dale (Rose) Fiore of North Haven. Grandfather of Amelia Fiore and Francesca (Sage) Leonard. Brother of Mary Carbone of East Haven, Henry Fiore of Hanover, NJ, Lorraine Fiore of Hamden, Dolores McGuinness of Hamden, William (Alla) Fiore of Vienna, VA, and Kathryn Bozzi of Westerville, OH. Predeceased by a sister, Annabelle Massotta, and a brother, Nicholas Fiore. Joseph was born in Hamden July 12, 1928, a son of the late Joseph N. and Immacalate Maselli Fiore, one of nine siblings. After graduation from Hamden High School, he served in the US Army from 1950-1952 with the 105th Transportation Corps in Goose Bay, Labrador, refueling aircrafts. He was employed with the D.F. Warner Masonry Co., and then with the Gay Shop, specializing in paint and decorating. In 1965 he joined the staff of Beecher & Bennett Funeral Home as the maintenence man; which he did for 35 years, and he spent another 14 years as their livery driver, retiring in 2014 after 49 years. As a resident of North Haven since 1965, Joe was a little league baseball coach and cub scout master, he helped organize the youth hockey league and coached the Pee wee's and Bantoms. Along with his wife Mary Lou, they founded the North Haven Art Guild in 1966 and were Co-Presidents for over 20 years, organizing an art show on the green for 25 years. He was a sculptor and won awards for his 'Tools in Action.' Joe also bowled in the International Duckpin Bowling League for 52 years, serving as league president for 38 years, and he was proud of his 200 point game. He enjoyed traveling to France and attending Quinnipiac Bobcat hockey games. Funeral service will be Saturday morning, November 30, at 10 a.m. at BEECHER & BENNETT, 2300 Whitney Ave., Hamden. Friends may visit with his family on Friday from 4-7 p.m. Interment with military honors in All Saints Cemetery. Memorial contributions may be sent to the Rand Pecknold/Al Carbone Hockey Endowment, c/o Quinnipiac University, 275 Mt. Carmel Ave., Hamden, CT 06518 or to St. Ann's Soup Kitchen, 930 Dixwell Ave., Hamden, CT 06514.