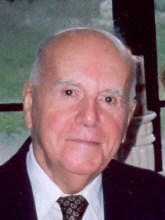 Joseph Don Hill, age 92, of Madison, formerly of Edgemere Rd., Hamden, passed away Monday, October 20, 2008 at his residence. Joseph was the husband of the late Thelma Mary Watts Hill. Born on April 16, 1916 in New Haven, he was a son of the late Anthony & Rosalie Chillemi. Joseph is survived by his daughter Denise Smart; sons Joseph A. Hill Sr. & his wife Gillian, Chris Hill & his wife Joan, all of Madison; sisters Zina Engengro of Hamden & Rosemary McNeil of Wallingford; grandchildren Joseph A. Hill Jr., Mark, Justin, Gregory & Eric Hill, Sherri Palmer, Ashley & Shayna Smart. He also leaves 9 great-grandchildren. Besides his wife & parents he was predeceased by a sister Louise Galanto & a brother Salvatore Chillemi. Joseph was a realtor with the Parker & Hill Realty Co. in Madison. He was formerly employed at Winchester Repeating Arms for over 20 years. He was a member of the Mason Lodge # 146 AF & AM in Wolcott & the Sphinx Temple Shrine in Wethersfield. Funeral will be from BEECHER & BENNETT, 2300 Whitney Ave., Hamden at 9:30 AM, followed by a Mass of Christian Burial at 10 AM in the Church of St. Rita, Hamden. Friends may call at the funeral home Wednesday Morning from 8:30 to 9:30. Entombment will take place in All Saint's Mausoleum, North Haven. Contributions in his memory may be made to The Hamden-North Haven YMCA, 1605 Sherman Ave., Hamden, CT 06514 or to the Valley-Shore YMCA, P.O. Box 694, Westbrook, CT 06498.