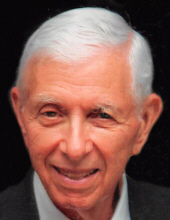 Joseph F. Barba, 83, passed away at his home in Cheshire, on April 28, 2019. Born in New Haven on February 6, 1936, he was a son of the late Joseph F. Barba, Sr. and Anne Rauccia Barba. Joseph was the loving husband of 60 years of Agnes Carrozzella Barba. Besides his wife, Joseph will be remembered by his daughters, Jennifer Barba of Cheshire and Susan Jacobs of Cheshire; grandchildren, Ethan, Jack, and Max Fuoco, Henry L. Barba, and Alexandra Czarkosky; brothers, Ronald T. Barba and his wife Katherine of Greenwich and John Barba of Oakton, VA, and several nieces and nephews. He was predeceased by his son, Matthew J. Barba. After receiving his degree in Civil Engineering from Yale in 1958, Joseph worked as a professional engineer and eventually became the owner and trustee of the Joseph Barba Co. in Cheshire, and also an Investment Advisor and Broker at Barba Capital Management. A military veteran, he served in the U.S. Army from 1958-1964. Joseph was involved with several committees on both the local and national levels; including memberships in the National Society of Professional Engineers and the American Arbitration Association Panel, the Cheshire Board of Selectmen, election to the first Cheshire Town Council in 1972, 3rd Degree Membership to the Knights of Columbus Santa Fe Council #2978, serving as Chairman of the Cheshire Democratic Committee and of the Cheshire Academy Board of Trustees, and sitting on the Advisory Boards of Sacred Heart Academy, the Catholic Family Services charities, and the Board of Directors at Bunting & Lyon Co. in Wallingford. He was a member of the Cheshire High School Addition Building Committee, and served on the Cheshire Public Building Commission from 2008-2015. He was also a parishioner and Trustee of St. Thomas Becket Church for many years. He was once awarded the Distinguished Service Award by the Cheshire Jaycees for his involvement in the community. Friends are invited to visit with his family on Wednesday, May 1st from 5:00 to 8:00 p.m. at BEECHER & BENNETT, 2300 Whitney Ave, Hamden. A Mass of Christian Burial will be Celebrated on Thursday, May 2nd at 11:00 a.m. in St. Thomas Becket Church, 435 North Brooksvale Rd, Cheshire. Burial will be private. In lieu of flowers, contributions in Joseph's memory may be made to his son's foundation, Matt's Homestead, LLC, c/o Webster Bank, 975 S. Main St., Cheshire 06410, or given at www.mattshomestead.com. To send a condolence to the family, please see obituary at www.beecherandbennett.com.

In Hamden, Nov. 23, 2000, Joseph F. Barba, Sr., 92 of Grandview Ave., entered into rest at his home surrounded by his family after a brief illness. He was the husband of the late Ann Marie Raccuia Barba. He was a resident of Hamden for over 60 years. Before his retirement in 1975 he was a Structural Engineer for over 45 years. He was employed by Westcott and Mapes of New Haven, the Town of Hamden as a Town Engineer and Sielye, Stevenson and Value of New York City. Mr. Barba later established his own general contracting firm in building construction. Loving father of Joseph F. Barba, Jr. and his wife Agnes of Cheshire, Ronald T. Barba and his wife Katherine of Greenwich and John A. Barba and his wife Margell of Oakton, VA. He was also survived by 11 grandchildren and a great granddaughter. He was predeceased by a sister Theresa Maiorano. Funeral from BEECHER & BENNETT, 2300 Whitney Ave., Hamden on Saturday, Nov. 25 at 10:15 a.m. followed by a Mass of Christian Burial at 11:00 a.m. in Our Lady of Mt. Carmel Church, Hamden. Friends may call on Saturday morning from 8:30 a.m. to 10:15 a.m. Interment in All Saints Cemetery, North Haven. Contributions in Joe's memory may be made to the Sacred Heart Academy Endowment Fund, 265 Benham St., Hamden, CT 06514 or to CT Hospice, 61 Burban Dr., Branford, CT 06405.