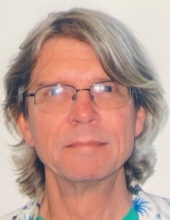 Joseph 'Keith' Yarbrough, 63, of Hamden, CT died suddenly on March 5, 2020. Born November 8, 1956, in Wilmington, NC, he was the son of Joseph and the late Charlotte (DeBusk) Yarbrough of Bristol, TN. He is survived by his beloved wife of 25 years, Sharen McKay, his father, a sister, Karen Truluck, of Longs, SC, a niece Jessica Knight, her husband Trevor, and their son Elisha, of Gray, TN, and a nephew, Tyler Yarbrough, of Johnson City, TN. He is pre-deceased by a brother, Ken, a sister-in-law, Sherry (McKinney), of Johnson City, TN, and a brother-in-law, Don Truluck, of Longs, SC. A 1980 graduate of North Carolina School of the Arts in Winston-Salem, NC, he majored in Music Performance and played the tuba. He was principal tuba player for the Winston-Salem Symphony Orchestra and the Greensboro Symphony Orchestra and a founding member of the Matrix Brass Quintet. Later in his life he turned to rock and roll and played the tuba as a bass instrument with several local bands in New Haven, CT, including Experimental Gene, Gene Gnomes, and the Lyric Hall Theater Orchestra. Music was the source of many friendships throughout his life. His interest in mathematics led to advanced degrees from Wake Forest University and Brown University. Keith was also an avid cruciverbalist who worked as a professional crossword puzzle editor and participated in crossword competitions. He lived a life rich in music, numbers, words, and friends, by whom he will be deeply missed. In lieu of flowers, donations may be made to the School of Music at University of North Carolina School of the Arts at 1533 South Main St., Winston-Salem, NC 27101-2738. Arrangements in care of Beecher & Bennett Funeral Home, 2300 Whitney Avenue, Hamden, CT.